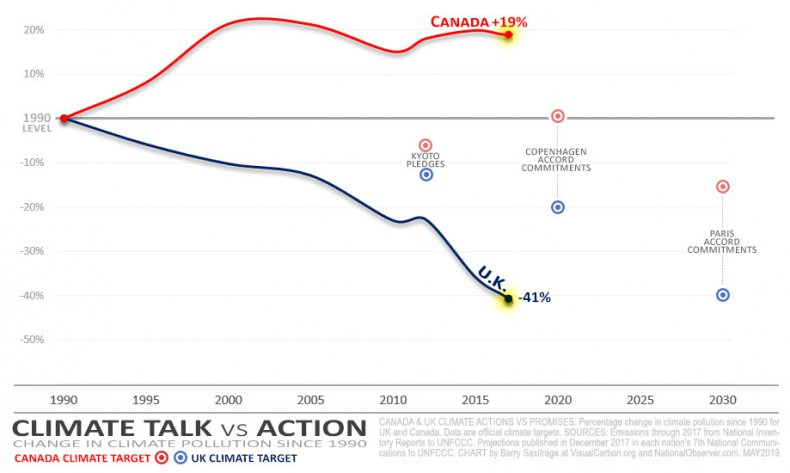 In December 2017, the United Kingdom’s reported greenhouse gas emissions were 41% below 1990 levels while Canada’s were 19% above 1990 levels. IMAGE SOURCE: The National Observer

In 2008, the UK government passed the UK Climate Change Act, which sets legally binding long-term emissions targets, along with 5-year carbon budgets 12 years in advance. To make sure the UK stays on track, the law covers all emissions in all years — not just a single target year in the far future.

The Act also established the Committee on Climate Change (CCC) to ensure that targets are set and monitored based on non-partisan, evidence-based, and expert advice.

In contrast, according to Environment and Climate Change Canada’s 2018 climate pollution projections report, Canada’s emissions are projected to be less than halfway to Canada’s 2030 Paris Agreement target.

As part of a plan for Canada to do its fair share in keeping global heating below 1.5 °C, we can use the UK Climate Change Act as a model, which was the recommendation of Ontario’s Environment Commissioner in Climate Action in Ontario: What’s Next?

Below are slides from a February 11, 2021 presentation by Mike Thompson of the UK Committee on Climate Change organzed by a team at the University of Calgary.