DOWNLOAD THE POWERPOINT PRESENTATION: The Sky is the Limit: November-2016-call

LISTEN TO THE CALL HERE: 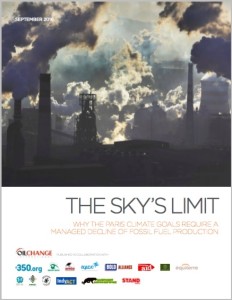 A new study released by Oil Change International, in partnership with 14 organizations from around the world, scientifically grounds the growing movement to keep carbon in the ground by revealing the need to stop all new fossil fuel infrastructure and industry expansion. It focuses on the potential carbon emissions from developed reserves – where the wells are already drilled, the pits dug, and the pipelines, processing facilities, railways, and export terminals constructed.

Click here to read the report’s Executive Summary in French.

Adam Scott is a Senior Campaigner at Oil Change International. His commitment to finding solutions to the issue of climate change has motivated his involvement in a range of research and advocacy positions. After completing a degree in environmental geography at the University of Guelph, Adam worked both as an academic and non-profit environmental researcher. He gained international advocacy experience through engaging in United Nations climate change negotiations over the span of a decade. Adam worked for six years at Environmental Defence Canada, moving from managing renewable energy programs to leading campaigns to stop oil pipelines and tar sands expansion. He is based in Toronto, Canada. Follow him on Twitter: @AdamScottEnv.